So obviously, this blogpost needs to be written in english. I simply can not write this in german, because it has been british and american all the way through.
Its a post about hope and fear and balancing out. And about art that means something. And meanings that change.

A long time ago I encountered a short story by Neil Gaiman: „Harlequin Valentine“ in the marvellous collection that is „Fragile Things“.
But it wasn´t until I heard the audio spoken by Neil Gaiman himself that i paid much attention to Harlequin as he followed, danced and lusted after and planned how to bed his Columbina -Missy with lips like a mermaid. In that breathless reading I fell in love with the character of Harlequin on his Valentines day, playing tricks, doing good, being sort-of-evil, being strong, being weak, being self-councious, being unsure, being in love, being in and out of luck.
Then when I heard the foreword to the stories I found out that the character of Harlequin is based on an actual piece of art by some „Lisa Snellings“
heyhoo Google there you go … what I found was no Harlequin right away but – Poppets.

These tiny beings have since then, in the summer of 2011 found their way over the Atlantic into my home and my life and heart, as well as into the lifes of family and friends.
We have been poppetyfied. Arguallaby they are just cute figurines made out of resin, the kind of things you´d put on the shelf to look good.
Only – they don´t want to be on the shelf. They have quite an impertinent way of looking back up at you, saying „Silly Human, take me along“ 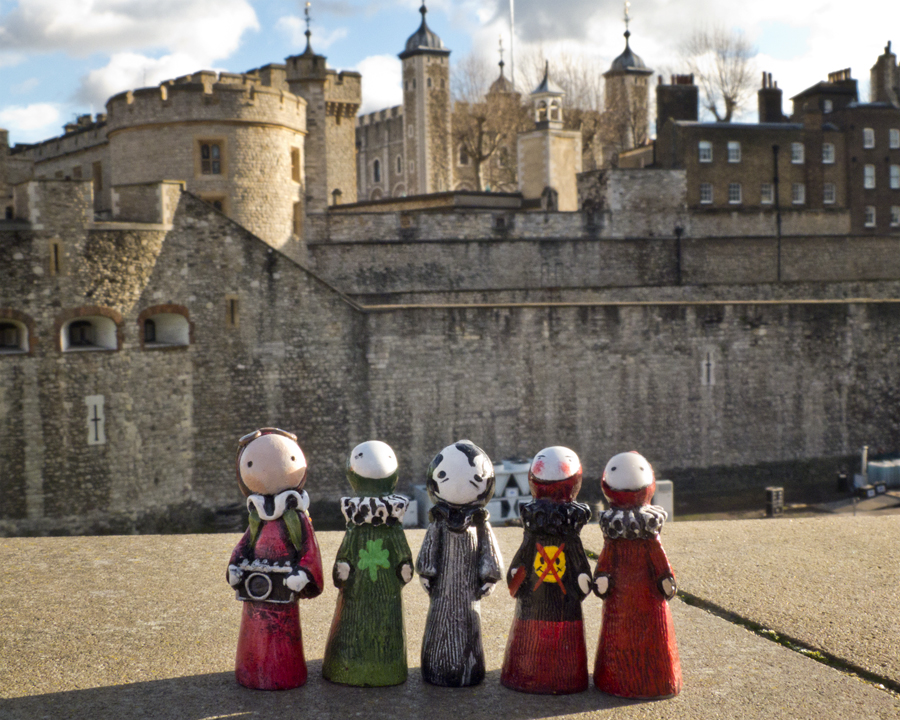 Poppets want to come to work, to the movies and planetarium, to the beach, to the scottish hebrides. So we take them along.
And life and the world more often than not look a little different with Poppets.
Lisa once said in her blog that watching the evening news is not the same with poppets at your side, and she was sure she couldn´t lie to a Poppet. I feel the same way about them. Quite often. 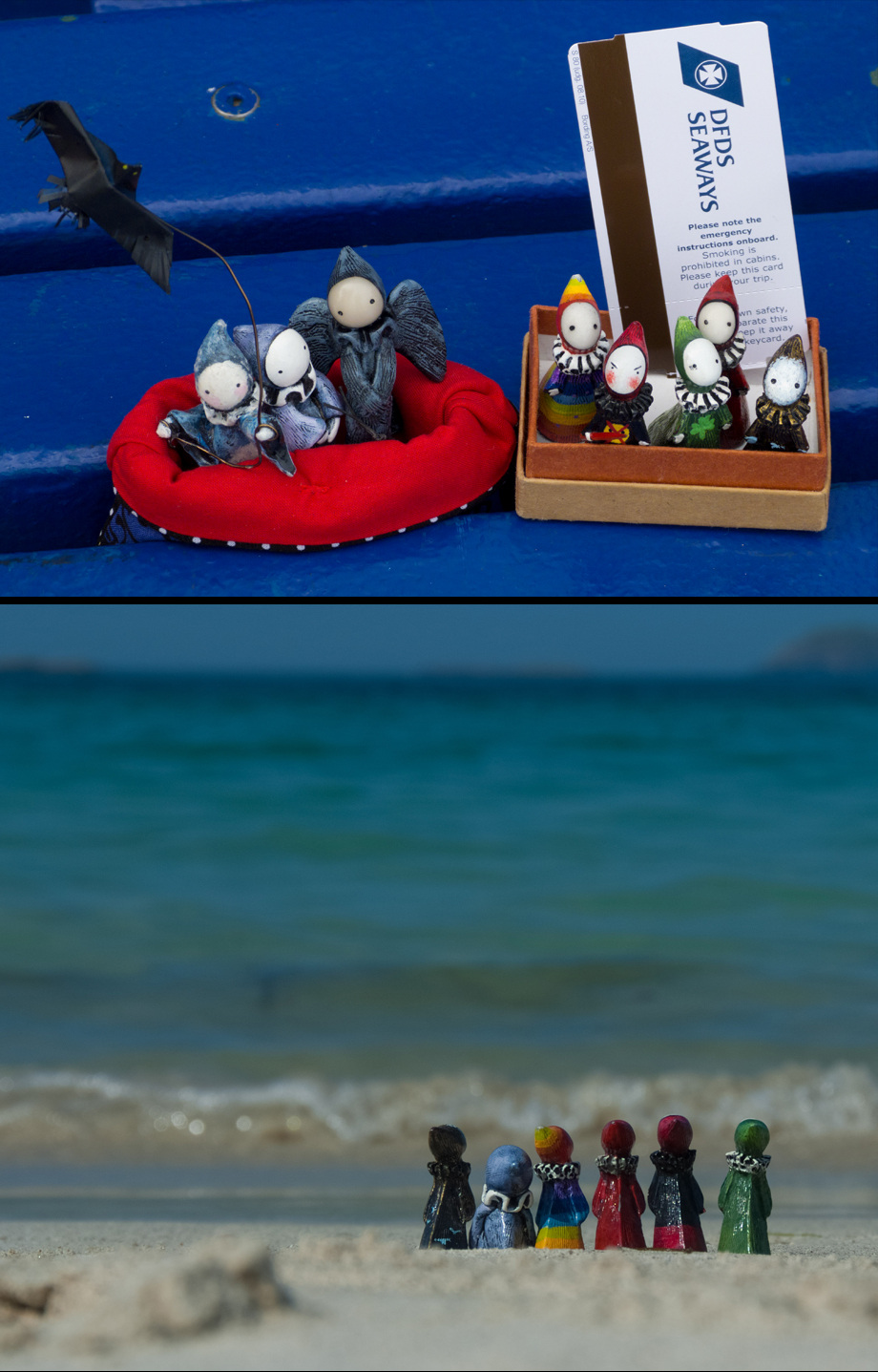 But this special post is not only about Poppets.It´s about my beloved Harlequin. After discovering Lisas art and aquiring Poppets and other pieces of hers in all kinds of manners, I still kept looking for a picture of that impressive Harlequin and found none for some time until – whoop – there in her Etsy Store, he was. I fell in love with his pose, his movement, his tiptoeing – so very much like in my head – and at the same time I knew he was not right for me.
He was „disguised“ in the wrong, black orange and green colours. This was almost, but not quite MY harlquin. So I skipped the sale, somewhat dissapointed for having been so close but not feeling right about it.
In the end of last year Lisa held an attic sale. There he was again, and again i was tempted and this time I gave in to the black and orange guy, wondering if I´d made a mistake. Half a day later I knew I made a mistake.
There was another one there, one I had never seen before. The right one for me. He was called „Luck´s Dancer“ but he was the real Harlquin Valentine for me.
Painted in clouds of Valentines Day. I felt so foolish but asked for a swap anyway and thankfully Lisa agreed. So there I was, happy as a millionaire, waiting for my proud and funny Harlequin to arrive from the Californian Desert to my german winter.

And then my life changed for the worse. Shortly after, I got diagnosed with triple negative breast cancer. Harlequin thoughts vanished.
Poppets had a hard time getting attention from me, altough they were there in the hospital, in the trenches of this all.

When i was back home, Harlequin had arrived and now has found his place on my mirror. 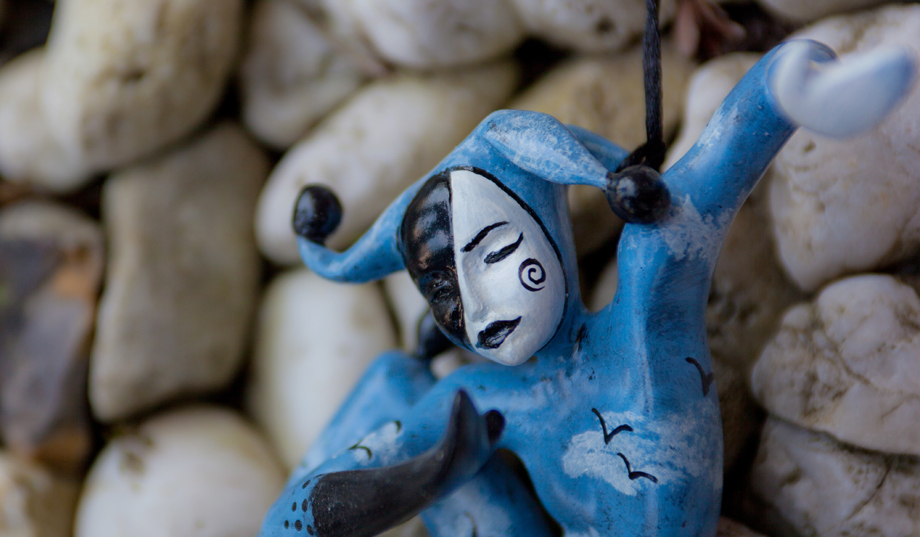 I often find myself staring for quite some time at him. One foot in deep black, like tar, like the final night. Like death.
One hand in black, like having pushed back from it already. And then, the black, transitioning into birds. Transforming the Blackness into something still dark, but weightless
Doing it with all your strenght and all your might. So concentrated on keeping the balance, you need to close your eyes. Stay in your blue clouds, do not give in to the dark.
You wear the black marks, but you have not sunk in yet, there is still plenty of skies and clouds to dance through. No one can see in your face how the blackness might trouble you.
We can only see a .. what ? Calmness ? Concentration ? Pain ? Peace ? in the white of your beautiful face. I can not decide what it is. Maybe it is not even the same all the time.
Keep your balance from now until the next minute, the next day, the rest of your life. Can you do it ? Will it get easier ? Tell me Harlequin. 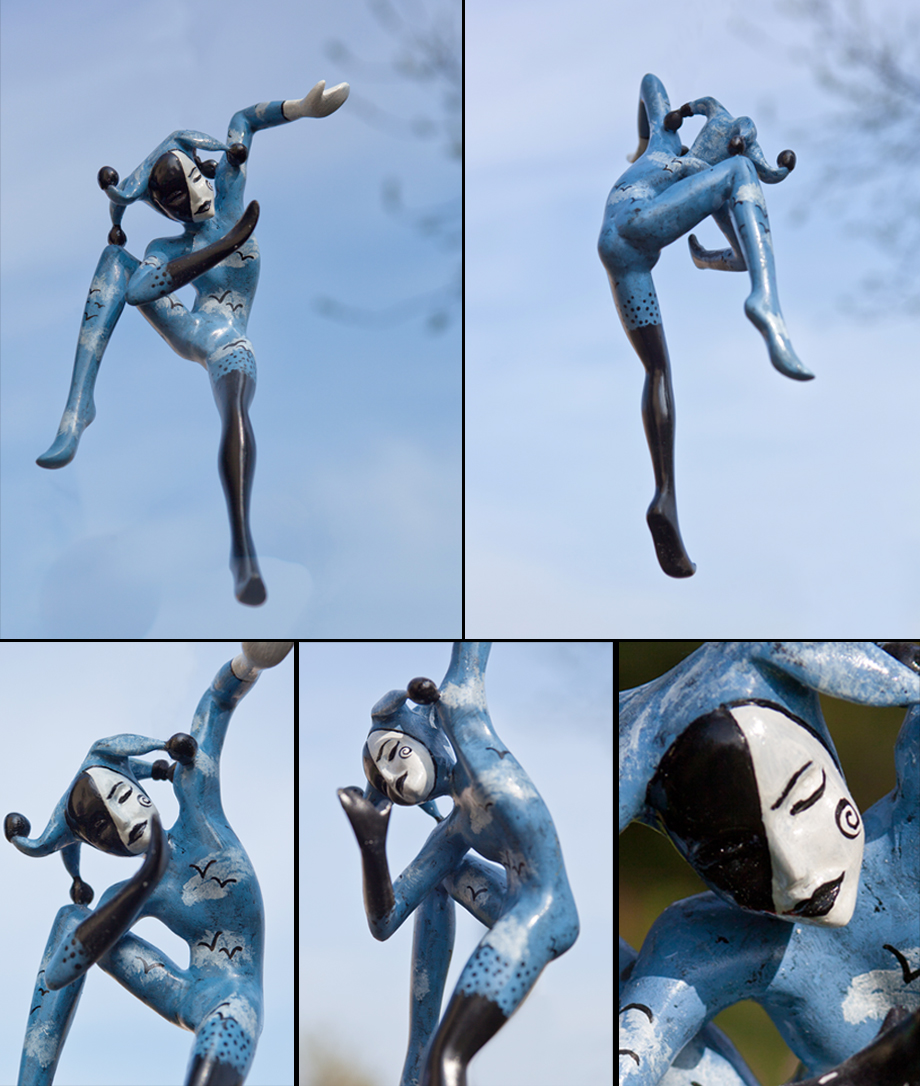 He has become something else for me in a very short time. He IS my mirror now, sort of. I had admired him in that short story for his fun, his elegance, his boldness even his selfishness.
Ironically i also had loved him most for – besides playing a trickster, playing rather unpleasant pranks on people – showing grace and selfless care for one special girl, just a tiny part of this story. Ironically it had to to with breast cancer.

One day, Harlequin, I hope to keep my balance as seemingly effortless as you do. One day, I hope we both can open our eyes and look at a pale blue and white clouded sky and exhale without fear.
To all of you, reading this. Look out for a Harlequin in your life. Maybe he is an elegant creature of mock and pranks. But maybe he is is trouble, trying so hard to keep his balance. Help him if you can.
If you – and I know now more than ever before, you are so many – are trying not to give in to the black, to keep in posture – you are not alone.
This is for you. I feel your exhaust, your fear.
I hope you find your strenght and eventually peace.
Even if it takes a whole life to balance out. Even if the dance never ends.

To Lisa and Neil Gaiman – thank you both for doing what you do. You are both an endless source of inspiration, and yes, often comfort to me.
This post is dedicated to the Memory of Anja Niedringhaus.